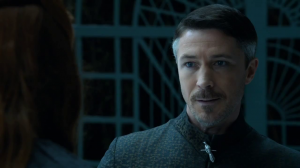 This episode focuses on the Lannisters, Daenerys, Jon Snow, and Arya, jumping all over the map.

In the immediate aftermath of Joffrey’s murder, Tyrion is imprisoned. Sansa, who had all the motive necessary to kill Joffrey three times over, flees the city with Dantos. Cersei orders all boats searched, but the pair manage to escape in a small rowboat, which they use to rendezvous with a large ship hidden in some thick fog at sea. After Sansa boards the ship, she realizes it belongs to Lord Baelish, and that Little Finger himself is aboard to welcome her. Baelish orders his men to shoot Dantos and explains to Sansa (in that creepy-uncle voice of his) that Dantos would just have betrayed Sansa after returning to King’s Landing. 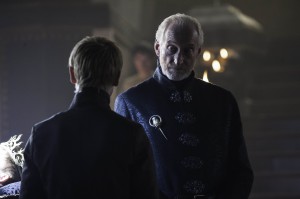 Joffrey’s body lies in state, and the Lannisters linger to pay their respects. Cersei and her remaining son Tommen are in the room as Tywin enters and begins to explain to Tommen what lies in store for him as the new crown prince. Nobody talks to Cersei; instead, she watches silently as her father begins manipulating Tommen into the kind of king he desires. As the boy and his grandfather leave, they pass Jaime, who enters the room with his sister. 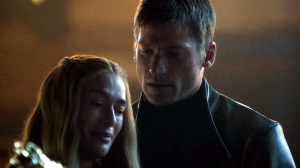 The royal guards leave them alone, and Jaime and Cersei have a heartfelt talk about their dead, demented son. Cersei lets her grief out for the first time since the Purple Wedding, begging Jaime to visit Tyrion in jail and kill him before a trial can be arranged (she’s certain that if Tyrion starts talking, he’ll find a way to weasel out of the charges). Jaime refuses to do his sister’s bidding; growling “Why have the gods made me love a hateful woman?”, he pulls Cersei to him forcibly and kisses her for the first time since his return to King’s Landing. In the most controversial scene yet in Game of Thrones, Jaime then rapes Cersei on the floor next to Joffrey’s body. (This is in contrast to the novels, in which Cersei resists halfheartedly–“not here”–before giving in to her desire for Jaime.) 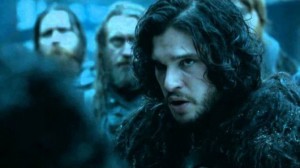 In the frozen North, the Night’s Watch receives word that the Wildlings and their giant allies are marching on the Wall from a small child whose parents were eaten during a raid. Jon Snow agrees that the Wall’s security must be prioritized before the safety of outlying villages, but is interrupted by another report from rangers. Learning that Karl and his mutineers are living in Kraster’s cabin, Jon tells the Watch that the defectors must be killed before Mance Rayder finds them. If Rayder finds out how weak the Crows are and attacks with his entire force, Jon and his brothers will be slaughtered. 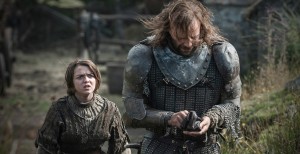 Arya and the Hound find lodging with a farmer and his child, who takes them in under the pretense that they fought for the Tullys. Over dinner, the farmer reveals that they’ve been bothered by bandits frequently and offers to pay the Hound to stay and protect the farm. In the morning, Arya discovers that the Hound has attacked the farmer and stolen his money before leaving. The Hound is unapologetic, saying that the farmer will die in a season one way or another, and that his silver shouldn’t be wasted on bandits. 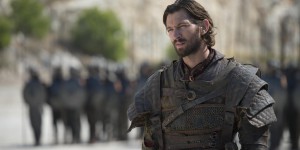 Daenerys and her army finally arrive at Meereen, and are greeted by the city’s champion fighter. To save face in front of the slaves and their masters, Daenerys must choose a champion of her own to enter in single combat. Grey Worm, Ser Jorah, and Ser Barristan all volunteer, but Dany manipulates them all by telling them they’re too valuable to risk, leading Daario to confidently volunteer. Daario faces off against the other champion, who fights on horseback, and defeats him easily by killin gfirst his horse, then the warrior himself. Dany then orders her catapults to throw boxes of broken collars into the city, planting the seed of rebellion in the slaves’ minds.