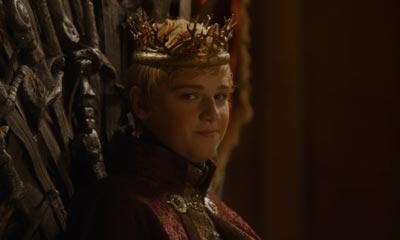 A new king is crowned

Episode 5: “First of his Name”

Game of Thrones Season 4, Episode 4 splits time between Kings Landing,  The Vale, Daenerys, Brienne, Arya and the Hound, and Beyond the Wall with Jon Snow and the Night’s Watch.

In King’s Landing, Tommen Baratheon is officially crowned the king. Following the inauguration, Cersei speaks with Margaery, informing her that Tommen may finally the first deserving king in ages. While in council, Tywin tells Cersei that Margaery and Tommen will be married in a foertnight, while her own wedding to Loras will be held soon after. He also tells her the gold mines have gone dry, leaving the crown deep in debt with the Iron Bank and only a union between the Tyrells and Lannisters can fix it. In the gardens, Cersei speaks with Oberyn about her daughter, Mycella. She asks him if he would be so kind enough to bring a gifted ship back to her once he returns to Sunspear.

Baelish and Sansa reach the Vale of Arryn, where they are greeted by Lady Lysa Arryn and her son, Robin. While she aware of Sansa’s identity, she informs her that she must never let anyone know the truth of who she really is. As Robin shows Sansa to her chambers, Lysa expresses her desire to marry Baelish that night. After much convincing and a reminding that she poisoned her husband Jon Arryn for him, he agrees to wed her asap. At night, Lysa has an intense conversation with Sansa about how Baelish really loved her mother, Catelyn Stark. Lysa then accuses Sansa of trying to seduce Baelish. After convincing her enraged aunt of her virginity, Sansa is told by Lysa that she is to be married to Robin once Tyrion has been executed. 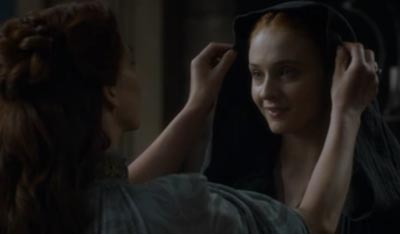 Across the Narrow Sea in Meereen, Daenerys meets with her council. She is informed by Daario that his men have taken control of the Meereneese navy. Upon hearing this, Daenerys lets it be known that she would like to use the ships to invade Westeros. While the council is optimistic about her chances to take control of King’s Landing, Jorah warns her against it as they may not be ready yet. He informs her that Yunkai and Astapor are once again being ruled by slavers. Upon hearing this, she tells them she will stay for now to rule over Slaver’s Bay.

On kingsroad, Brienne and Podrick ride in the direction of the Wall with hopes they will find Sansa and Jon Snow. Despite Brienne’s reluctance to accept her new squire, she is eventually swayed by his story of killing a knight to protect Tyrion in the Battle of Blackwater.

In the Riverlands, Arya and The Hound discuss her the reciting of her “kill list”, with both agreeing about the demise over his brother, The Mountain. However, she also informs him of his own name on the list. In the morning, The Hound mocks Arya’s swordplay and challenges her to strike him. She obliges, but does not damage as he is wearing armor. He smacks her down and tells her that her style is no use against armored foes. 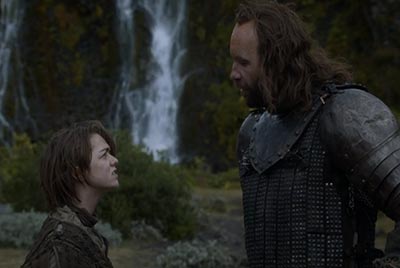 The Hound laughs at your cartoonish swordplay.

At Crasters, Locke infiltrates the mutineers cap. Inside, he discovers Bran being held captive but does nothing. Locke returns to Jon Snow and some members of the Night’s Watch, who are lurking closely in the woods. Locke tells Snow they should strike soon, but never mentions the fact that his brother is chained up in a hut. Back in Bran’s hut, Karl enters and is about to rape Meera until the invading watchmen invade. Outside, the battle rages while Locke enters the hut. He unties Bran and runs out with only him informing him that he is to be taken away. However, Bran uses his warg abilities to enter Hodor and snap Lockes neck. Bran see Snow in the battle, but is stopped from joining him by his Jojen who tells him his brother will never let them journey north. Instead, the depart unseen and continue on the way.

Inside, Snow engages in an intense battle with Karl. Just as Karl is about to make a powerful strike, Snow is assisted by one of Craster’s wives in killing the mutineer. Jon is then reunited with Ghost, who has just returned from killing Rast. The episode ends with Craster’s wives turning down an invitation to come to the wall. Instead, they burn down Craster’s and everything inside. 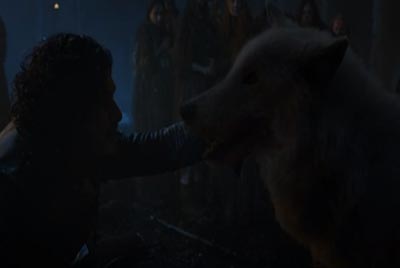 Reunited and it feels so good