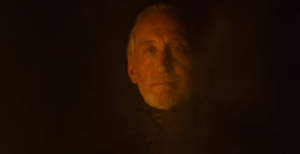 Tywin Lannister welcomes you to Season 4.

The fourth season of Game of Thrones has begun, and already things are looking bleak for pretty much everyone. The only person excluded seems to be Tywin Lannister, who continues to be quietly awful as he orders the Stark family’s greatsword melted down into two smaller blades. The sword, Ice, is made from Valerian steel, making the two new swords very valuable. Tywin gives one to Jaime, and the two argue about Jaime’s desire to reenter the Kingsguard instead of returning to Casterly Rock. 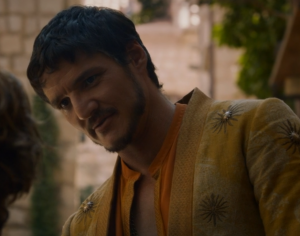 Meanwhile, Tyrion has been sent off on a humiliating welcome-party mission to escort a Dornish prince into King’s Landing. Much to Tyrion’s chagrin, the procession barely notices his attempts at diplomacy, and the prince isn’t even with them. In fact, Prince Doran, who was supposed to come, sent his younger brother instead, and Oberyn has already entered the city undetected. Tyrion finds Oberyn in one of the city’s many brothels, where he has already purchased several prostitutes (male and female) and stabbed someone grievously for singing “The Rains of Castamere.” Oberyn and Tyrion have a frank talk in which Oberyn reveals he’s in the city to seek revenge on House Lannister for the murder of his sister Elia and her children. Elia was engaged to marry Prince Rhaegar Targaryen before Robert’s Rebellion, and was brutalized and murdered–presumably by Ser Gregor Clegane–during the ensuing Targaryen purge. 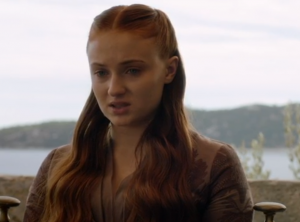 Tyrion, concerned about his family’s safety, is also worried for Sansa–now his wife. Sansa refuses to eat even her favorite foods, and Tyrion joins her in the gardens to attempt to buoy her spirits. Sansa tells Tyrion frankly how she can’t stop thinking about her family’s murders at the Red Wedding, and retreats to the Godwood to be alone while Tyrion returns to his quarters to argue with an amorous Shae. Sansa has a run-in with the former Ser Dontos, now King Joffrey’s fool, who gives her a necklace in return for saving his life.

Elsewhere, Jaime and Cersei meet for a private conversation of their own after Jaime has a gold prosthetic hand fitted onto his right arm. The twins’ relationship has changed in Jaime’s absence, which has not made Cersei’s heart grow fonder. She resents him for being gone when she needed him most, and Jaime becomes angry, not knowing what to do to please the woman he loves. Their conversation is interrupted by one of Cersei’s handmaidens, who has overheard Tyrion arguing with Shae about their relationship. 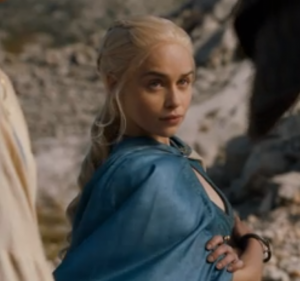 Across the Narrow Sea, Daenerys rapidly approaches the city of Meereen, a merchant city built on slave labor. She sees slaves nailed up beside the road to mark the way, and vows vengeance. Her new lieutenant Daario cautions her that if she wants to be an effective queen, she must learn about the people she’d have as subjects. 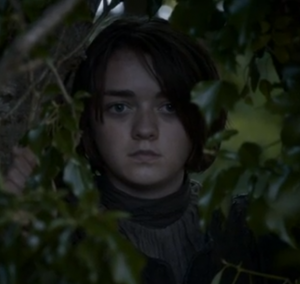 Back in Westeros, Arya Stark is still wandering around with Sandor “The Hound” Clegane. The two have been journeying to The Vale since the end of season 3 so the Hound can collect a reward and ensure Arya’s safety. Along the way, they accidentally run into a group of Lannister soldiers including Polliver, who stole Arya’s sword Needle. She insists on getting it back, and drags the Hound into a remote inn. The soldiers are abusing the innkeeper and barmaids, and Polliver spots the Hound and sits down for a conversation. The talk quickly turns confrontational, and Polliver attacks the Hound, leading to a vicious slaughter. Arya manages to save the Hound and retrieves Needle, killing Polliver the way he killed her friend Lommy–by shoving her blade through his skull.