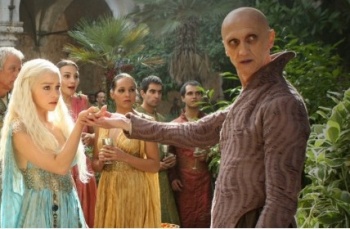 Pyat Pree was a warlock from Qarth, who resided in the House of the Undying.

After Daenerys Stormborn entered Qarth with her dragons, Pyat Pree killed the rest of the city’s council of thirteen and stole her dragons, putting them in the House of the Undying. Pyat lures Daenerys there, explaining that the dragons’ presence made his magic stronger. Because the dragons are stronger in the presence of their mother, Daenerys, he wants to keep her and the dragons chained as his sources of power for eternity. However, Daenerys tells Drogon, her largest dragon, to set fire and kill Pyat.

Pyat Pree is played by actor Ian Hanmore and he appears in the second season.