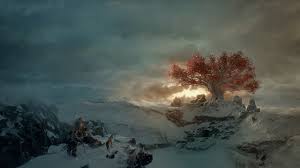 Game of Thrones Season 4 Episode 10 was a doozy. We start this episode where we left off last week, up at the wall. Jon is heading north to talk to Mance Rayder. The damage from the battle the night before is palpable. Jon passes by dead crows and wildlings alike, even a dead giant. He enters the wildling camp and they surround him. Jon puts his arms up in the motion of surrender, but keeps walking towards Mance’s tent. None of the wildlings stop him.

Mance greets Jon, Jon says he;s come to talk. Both of the men have an air of desperation to them, they know they can’t keep fighting. Mance offers Jon a drink, and they sit down and start talking. Mance says he wants no more blood, he promises that if the Night’s Watch lets them through the wall, no one else will die. You can tell that Jon has a lot of respect for Mance, and vice versa. At the end of the day All Mance wants is to protect his people from the white walkers. Seems reasonable to me. But Jon has come to kill Mance. He glances at a knife stuck in a piece of wood next to the table. Mance realizes that Jon came to kill him, and his men try to kill Jon, but Mance stops them. Just then, a horn sounds. We see troops surrounding the wildling camps from all sides. Not the Nights watch, but hundreds of orderly, well manned troops. Stannis has sailed North to protect the wall.

The wildlings try to fight, but Mance orders them to stand down, probably saving all of their lives. Jon and Mance leave the tent to talk to Stannis. Davos recongizes Jon as a crow and asks what he’s doing with Stannis. Jon explainds the situation and said his father was Ned Stark. Remember way back when Ned sent Stark a letter saying that Joffrey was a bastard and he was the rightful king? Well Stannis likes Ned a lot for that. He asks Jon what Ned would have done with Mance. Jon tells Stannis to keep him prisoner, saving his life. Stannis tells Mance to kneel to his victor. Mance says that he surrenders and respects Stannis, but wildlings do not kneel. 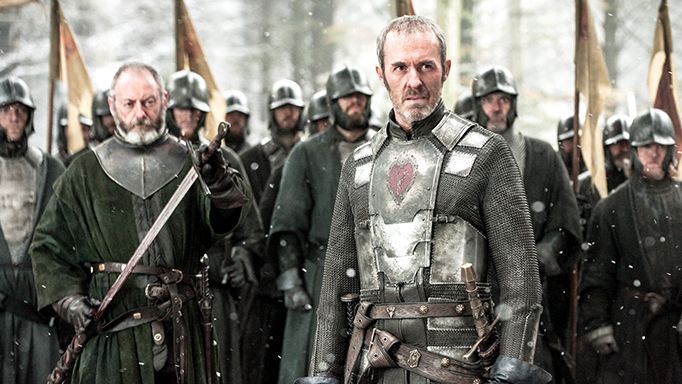 Back in Kings Landing, the Mountain is dying! Turns out Oberyn’s (RIP) spear was tipped with poison. Hooray! He sucks. Cersei wants to keep him around though, so that he can crush more skulls at her bidding. She enlists Maester Pycelle to help, but he’s useless as usual. But Qyburn thinks he can cure him! He’s going to be different though. Zombie mountain? I’m in.

Cersei then goes to Tywin and tells him she will not, under any circumstances, marry pretty boy Tyrell thank you very much. And if Tywin tries to make her, she’ll tell everyone about her and Jaime. Tywin actually seems nervous for once. Cersei then goes and finds Jaime to have revenge sex.

Cut to…Dany! She’s talking to an old man who used to be a slave, and now wants to be a slave again. It goes back to the whole “ruling is hard” thing with Dany. It’s boring. But what happens next isn’t. A man approaches Dany’s throne carrying a bundle of…something. We’ve seen this before, but last time Game of Throne’s spared us from looking at the charred corpse of a child. Not this time. I’ll admit it was pretty heartbreaking.

Dany goes into the dungeons and her babies follow of her. Well two of them do, but Drogon is missing. (How do you just lose a dragon? That seems pretty irresponsible.) Dany lures them with some meat, and then chains them up in the basement. It’s clearly difficult for her, and it’s a moving scene. But what did she think was going to happen? I know Dany is supposed to be this awesome character, but it really seems to me like she didn’t think this whole dragon thing through. OF COURSE people are going to die, innocent people! You can either be a mother of dragons, or you can be a ruler, but I don’t think Dany has time to do both. 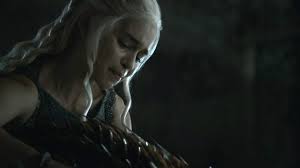 Back at the wall, the crows are burning their dead. Stannis is still there, it seems like he’ll be there for awhile. John looks through the fire and sees…Melisandre staring back at him. We know how she likes to see things in the fire. And the last bastard she was around is currently stranded at sea somewhere in a rowboat (we miss you Gendry!). But we also know how John likes redheads. This could be trouble.

Jon goes to talk to Tormund, who was captured by the Night’s watch last episode. He tells Jon that he ws changed by the wildlings, and he will never kneel before a king again. He also tells Jon tht he knew Ygritte loved him, because she was always talking about how she was going to kill Jon. Tormund was probably right about both of those things.

Jon burns Ygritte’s body at a weir tree. It’s really sad. They should have never left that cave.

Even father North, Hodor is still dragging Bran around. Jojen is really sick and keeps collapsing in the snow, but then, at last, they reach the weir tree! It’s just a simple hop, skip and a jump away. Of course, as they’re approaching the weir tree, skeletons crawl out of the sky and start attacking them. Just your average day north of the wall. Apparently these are also wights, corpses reanimated by white walkers. Bran wargs into Hodor again so that he can fight them. The jury is still out on whether or not that’s morally acceptable. Jojen sees this, and then gets stabbed by a wight, repeatedly. Meera freaks out. Suddenly someone starts throwing fireballs. What looks like a young girl tells bran to come with her. She looks like a woodland elf, but she’s got dreadlocks and piercing blue eyes. She is one of “the children”, a race who lived in Westeros long before the first men arrived. They go with her, except Jojen, who dies. The wights can’t follow them. The girl brings them to a very very old man who lives in the tree. He’s the three eyes raven, and he promises Bran that he will fly.

Over near the vail, podrick and Brienne stumple upon…Arya and the Hound! Obviously, Arya and Brienne have a lot in common. Arya decides to start traveling with Brienne and the two ride off into the sunset, talking about sword fighting and their stylish tomboy hair cuts. Just kidding! Brienne realizes that who Arya is when she sees the hound, and demands Arya goes with her. The Hound refuses to let her. The two have a brutal, bloody, all out fight. Neither of them are knights, so anything goes in this fight. Brienne literally bites the hounds ear off! Then she pushes him off a cliff and goes to look for Arya, who of course has disappeared. 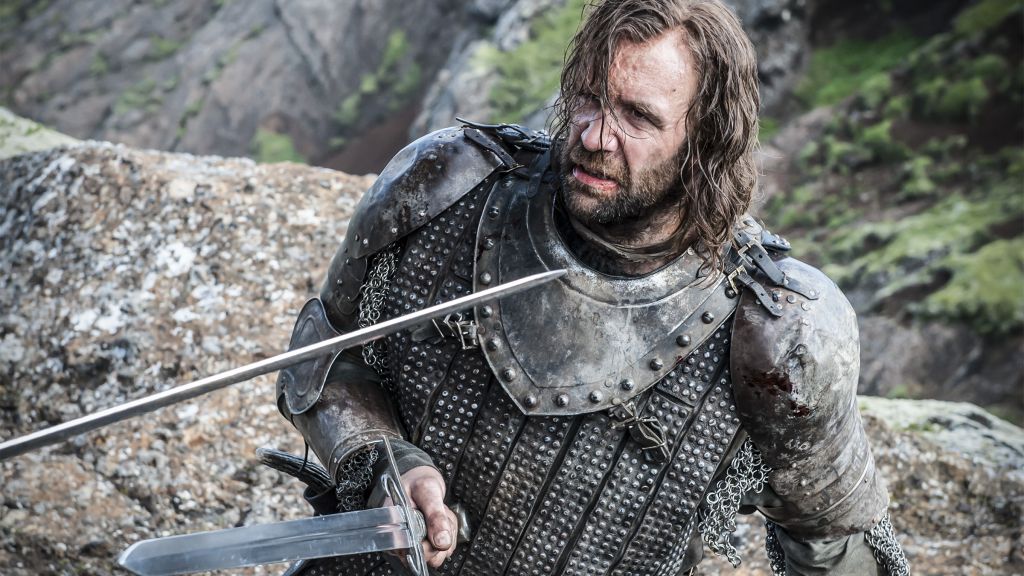 Arya goes down to the hound, knowing that he’s dying. He begs her to kill him so he doesn’t have to suffer. He reminds her that he killed the butchers boy, and that he wanted to rape her sister. She goes up to him, takes his money, and walks away, leaving him to supposedly die. Personally, I’ll believe it when I see it.

FINALLY, we get to Tyrion in his cell. Jaime opens the door, and just like that Trying escapes. It really was that simple the whole time. Jaime tells Tyrion that Varys is waiting for him just up the stairs, to take him far away from Kings Landing. But Tyrion can’t leave just yet. He sneaks to his father’s chambers and finds Shea lying in his bed. She grabs a knife, he chokes her with the necklace he gave her earlier in the season. Oh, the irony! He then takes the crossbow and arrows Tywin conveniently had hanging on his wall and goes to find his father.

Tywin is sitting on his throne, so to speak. He doesn’t look particularly surprised to see Tyrion. Years of resentment and anger flow out of Tyrion, he knows his father always hated him. Tywin knew that Tyrion didn’t kill Joffrey, but he still sentenced him to die. Tywin says they should go back to his chambers and talk, but Tyrion says he can’t go back there because shae’s in there. Tywin calls Shae a whore. Tywin shoots him through the heart. Tywin says you’re no son of mine. Tyrion says I have always been your son. He shoots him again and leaves him to die. 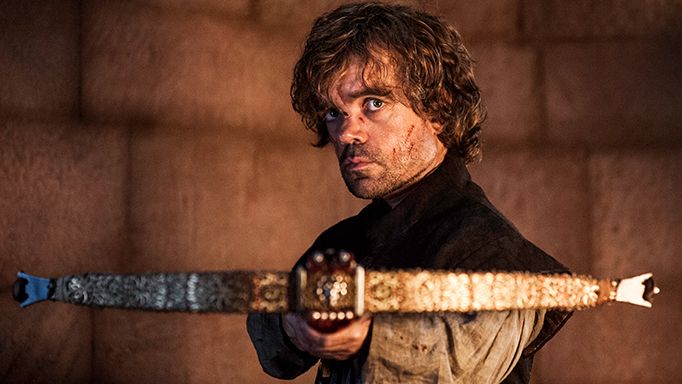 Tyrion walks upstairs to varys. Varys sneaks him into a crate and puts him on a ship. Varys then hears the bells tolling in the red keep and decides it’d be a good idea to get out of King’s Landing, so he gets on the ship too.

Arya sees a boat heading out of a port. She approaches the captain and says she wants to go North. He says he’s not going North, he’s going to Bravos. Arys gives him the coin that Jaquen gave her at the end of season two and says Valar Morghulis. The captain looks awestruck, and then gives her the best cabin on the ship. So that’s how season four ends, with two of our favorite characters sailing across the narrow sea onto bigger and better things. Season five can’t get here soon enough.